Today we went for a little field trip to spotted lake to show the students this unique/amazing lake and to talk to them about about its historical significance and how it was important for the local First Nations people.

What actually happens with the lake is that it is comprised of many different and highly concentrated minerals. Magnesium, Calcium and Sodium Sulfates are some of the largest minerals included here. In the summer months most of the lake water evaporates and leaves the minerals behind. These minerals crystallize and large spots begin to appears. The colours will vary as each spot will change as the mineral composition changes at different times throughout the summer. This colourful lake, know to the First Nations People as 'Khiluk', was considered a sacred site. The waters were therapeutic and had healing powers to them. There were even truces made between tribes at war so that the warriors could visit the lake and heal their wounds. There are 365 spots in total representing each day of the year. It is said that if you have an injury or are suffering from some kind of ailment you can go to the lake and you will find the right spot you seek to be healed. 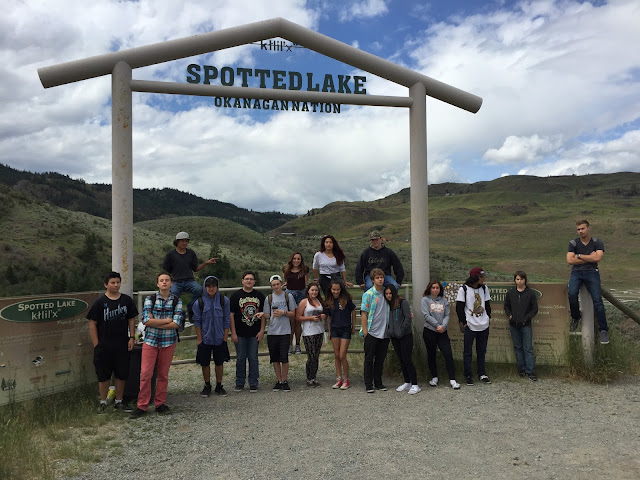 The lake still looked amazing but since there was a lot of water in the lake the spots were not as prominent as they could have been if the water level was lower.

Posted by Ryan Baptiste at 9:39 AM